J.F. Madeuf and Friedemann Immer assembled an ensemble of trumpet players and developed an interesting concert program, and my workshop produced six trumpets to be used for this performance.

In July of 2007, for the occasion of the 775th anniversary of the village church in Belitz, we presented a concert in the church. At that concert the church was presented with a copy of the Birckholtz trumpet to be displayed in place of the original next to the memorial plaque. The Birckholtz trumpet had played for the first time in a modern public performance. 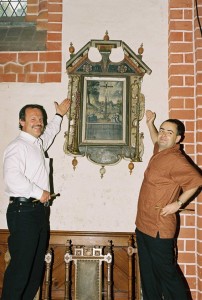 the trumpet (copy) is back

Since July of 2007 concerts in the church in Belitz (Prebberede) have taken place each year, and the performers play on the set of copies of the Birckholtz trumpets.

The programs have been skillfully put together by Jean-Francois Madeuf with an international ensemble of musicians in various instrumental combinations. 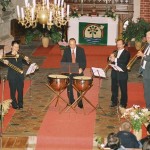 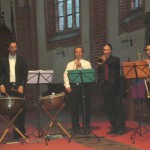 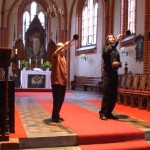 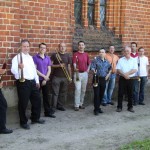